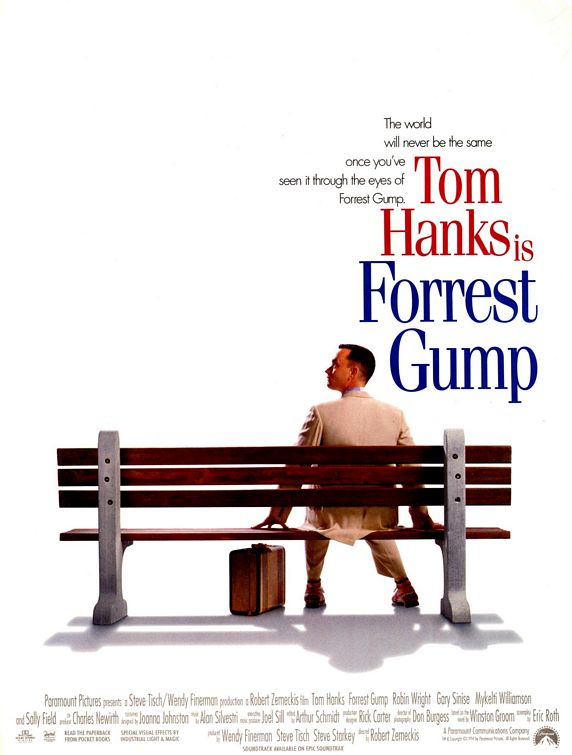 Forrest Gump is a movie heart-breaker of eccentric fun and startling style. Lead actor Tom Hanks brings a touching severity to the role of an idiot expert from the South who finds strength in God, country, his childhood pal, Jenny (Robin Wright), and his good mama (Sally Field). When Forrest falls a few IQ points short of minimal school requirements, Mama ties other ways to admit his son to school. Soon she realizes that her son has a gift. As Forrest makes his pilgrim's progress from the '50s to the '80s, he becomes a college football star, a Vietnam War hero, a shrimp tycoon and even a father.

The effects dazzle, though never at the expense of the story. It's Hanks who brings comedy and unforced humanity to the literary conceit of Forrest, though the slim actor scarcely resembles the 6-foot-6-inch, 240-pound bruiser of the book. In the Army, Forrest saves his captain (Gary Sinise), whose legs are later amputated, and the captain resents him. Forrest is everything we admire in the American character, honest, brave, loyal, and the film's fierce irony is that nobody can stay around him for long. He knows the limits of a holy fool who can't understand the hypocrisy of postwar America that this mischievous epic so powerfully reveals. The peace-love pretensions of the '60s are impaled as neatly as the greed decades that follow.

Overall it is an excellent movie that demonstrates the life of a determined personnel that leaves important lessons for audiences of all ages. What I liked about this movie is the deep concept and moral teachings that the movie has for the audience.